You may have noticed that the league you are in shook up quite a bit this week based on those who went all in on “Trainwreck” versus those who didn’t.  Why did that happen?

I’m a month into playing Fantasy Movie League now and if there’s one thing I’ve learned so far it’s that the top of your lineup matters several times more than the bottom does.  What I mean by that is that the choices you make for those first 3-6 slots matter a lot more than the ones that simply fill out the remainder of your slots with whatever $FB you have left after making those first hoices.  The results this week show why that’s so important.

Top of the Lineup Analysis for Week 9

Going into Week 9, you had three basic choices of top of the lineup combinations with which you could maximize your score (with estimated gross from ProBoxOffice.com available on July 15):

Last Wednesday, if you had assumed that those estimates would be correct, it became clear that the second choice would have been a bad one.  You couldn’t make up a $25M shortfall compared to the first choice with 17 less $FB at your disposal.  The third choice was promising but you would have had to make up for the $32M difference with only 6 more $FB, which wasn’t likely.  And that’s all without considering the bonus for Best Performer, which in the above would net you $6M more for the top spot.

The first combination still wins even if “Trainwreck” did worse than expected and “Ant-Man” did better than expected.  This despite the likelihood that “Ant-Man” would win the weekend box office gross.  The reason for that is the ratio of gross box office revenue to $FB given what “Trainwreck” was priced at, something I wrote about in my Summer 15 Week 9 picks article I inaugurated this blog with last week.

So, what actually happened?  “Ant-Man” didn’t quite meet expectations at around $57.2M and “Trainwreck” raked in the estimated $30M, so the math above became even more favorable for those that went all in on “Trainwreck”.  That’s why league standings got shaken up the way they did.

The perfect pick this week was: 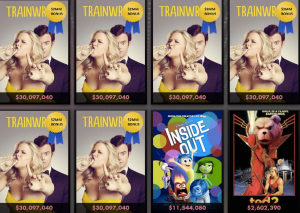 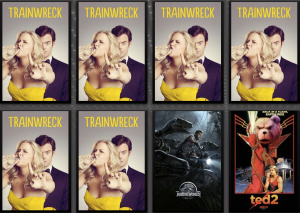 While I was fortunate enough to move up a spot in the Opened Week 6 league to #2 (out of 1043) and up two spots to #6 (out of 816) in the Rich Eisen Show league based on getting the top of the lineup right.  I missed on “Jurassic World” versus “Inside Out” toward the bottom of my lineup, though.  I thought that “Minions” would have a bigger impact on “Inside Out” than it did, which ended up costing me a difference of around $300K.  Instead, “Inside Out” held strong, falling off the its prior week by only 35% to $11.5M while “Minions” fell off 57% to $49.3M.

Looking ahead to Week 10

That’s it for Summer ’15 Week 9, so let’s look ahead to Week 10.  If I use a rough thumbnail of estimated box office, assuming a 50% drop off for existing movies and the ProBoxOffice.com long range forecast for new big releases, the Best Value estimates given new $FB pricing for Week 10 are as follows:

A quick run of my nerdy bin packing Monte Carlo simulator reveals that combinations involving “Pixels” x2 and “Paper Towns” x2 look like good early candidates.  That’s subject to change, though Wednesday when the more precise ProBoxOffice.com estimates are out.