With just two more opportunities to move up in the Summer 2015 season of Fantasy Movie League and with a light slate of new movies, choices are especially tough this week.  As pointed out this week by Box Office Guy in his Dog Days of Summer article, schools are back in session all over the country and that typically starts off a dumping ground of movies with low expectations.  “Hitman: Agent 47” is a reboot of a movie based on a video game that didn’t do super well the first time around, “American Ultra” tells a story familiar to Gen Xers but with likable Millenials, and “Sinister 2” carries on a horror series.  This on the heels of a great opening weekend from “Straight Outta Compton” last week and the ageless Tom Cruise still in movie houses with his “Mission Impossible” cash machine.

“Fantastic Four” is generally considered a bad movie, but just how bad is it?  FML statisticians tease us this week by putting it in play for Best Performer and the $2M per screen bonus.  It’s opening weekend was not good, possibly series killing, and last week it dropped off a whopping 68.2%.  Yet when you take the ProBoxOffice.com weekend forecast at its word (which includes 12 movies this week, assume a 40% drop off of the remaining three movies at our disposal this week) and put the numbers into my nerdy bin packing estimate comparator you get a Best Performer table that looks like this:

Try it out yourself at:

If “Fantastic Four” drops only 52.3% it is the Best Performer favorite.  Should that falter, “The Man From U.N.C.L.E.” is predicted to drop a reasonable 47.8% and there sits the ageless Tom Cruise with perhaps an optimistic 33.1% drop but there is a ton of “Mission Impossible” data to back that up.  If you look at the next few films, their drop offs seem reasonable as well or at least it is difficult to make much of an argument that they will do significantly better.

Of the films without ProBoxOffice.com estimates this week, “Pixels” would have to only drop off 29% to rival “The Man From U.N.C.L.E.” Best Performer forecast, “Shaun the Sheep” only 13%, and “Trainwreck” only 26%, none of which seem likely.  That reduces the Best Performer conversation for Week 14 down to “Fantastic Four”, “The Man from U.N.C.L.E.”, and “Mission Impossible”.

I have no faith in “Fantastic Four”, which was horribly reviewed and saw its director publicly fighting with its studio.  If it only falls 59% instead of the forecasted 52.3%, the other two Best Performer candidates are better plays and are based on more convincing data.  “The Man From U.N.C.L.E.” was well reviewed and up against stiff competition in its opening weekend and there are four other films with the ageless Tom Cruise saving the world as a super spy to base its forecast on.

1) I’m sitting at 10th place in the Rich Eisen League and in attempt to move up, I’m going all in on “The Man From U.N.C.L.E” as best performer this week. 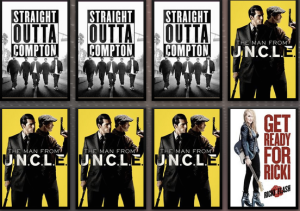 2) If you aren’t as confident in “The Man From U.N.C.L.E.” but instead believe in the ageless Tom Cruise, this combination is for you:

3) If you are sitting comfortably at the top of your league and you want to hedge your bets between Best Performer candidates, you might consider: 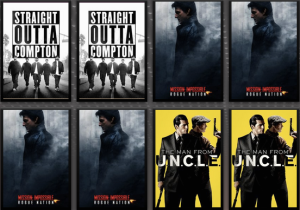 We’ll see how it all plays out as the Fantasy Movie League 2015 Summer season winds down.