And so the first week of the inaugural Fantasy Movie League draws to a close by bringing Zac Efron back in my life.  In 2008 with my then 6-year old daughter and my wife, I saw the first showing after school let out on the opening Friday of “High School Musical 3” whose advertising boasted it as “the music that defined a generation.”  I suppose that was true of my 6-year old at the time and that phrase armed me with razzing material for the rest of her life.

That film starts with an extreme close up of a sweaty, mop topped, Zac Efron and when his face popped on the 50 foot wide screen, it invoked the loudest, highest pitched screaming from the sold out crowd of preteen girls I’ve ever heard to this day.  Like, The Beatles on Ed Sullivan loud and I couldn’t stop giggling while witnessing this top 10 parenting moment.

Will Zac help us all in Week 15 of the FML Summer 2015 season with his latest, “We Are Your Friends”?

You can try this yourself at http://compare.fmlnerd.com but “War Room” is the clear favorite based on these forecasts.  “Fantastic Four” rears its head again only this time with no ProBoxOffice.com forecast behind it, which makes it tougher to analyze.  If it drops 50% compared to revenue last week it is still the best second choice, but it dropped  54% last week and 68% in its second week.  Even a 52% drop puts it in third place for Best Performer.

If you discount “Fantastic Four”, “War Room” would have to bring in closer to $6700K for other films to have a chance.  That would mean ProBoxOffice.com would have to be wrong by -20%, which we learned Tuesday is a possibility given the accuracy of their forecasts earlier this FML season.

So if that happens, what are our other choices?

“No Escape” is next in line according to the forecast.  “Minions would have to drop less than 26.9% to get a better BP score, which doesn’t seem likely.  “American Ultra”, however, has a chance if you move its slider a few places to the right and give it a drop of 45.5% instead of its forecasted 50.5%.  All other films have to perform a little too much beyond the expected forecast to be a Best Performer threat this week.

You really have a viable choice for each the three Best Performer candidates and your choice will depend on which one you think will get you the $2M per screen bonus this week.  A big dose of “Straight Outta Compton” accompanies all of them.  Like last week, I have no faith in “Fantastic Four”.  I was barely right about that, but I’ll take credit where I can 8).  In some of the scenarios I ran, “Fantastic Four” can get Best Performer and still not be part of the best line up, which I’m pretty sure has never happened in the 14 week run of Fantasy Movie League so far.

The other three candidates are worth considering more seriously as the centerpieces of different combinations.

1 – With my ProBoxOffice.com accuracy research fresh in my head, “War Room” would have to fall to the low end of their typical forecast in order for this to be a contest at all for Best Performer.  I’m going to trust it does better than that, despite the fact that there are no Rotten Tomatoes ratings on it as I’m typing this on Wednesday evening, and go with: 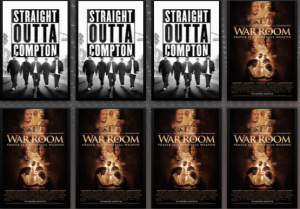 2- If, however, you feel queasy about “War Room” with its grass roots, faith-based marketing campaign and instead believe in “No Escape”, this is the best possible combination:

3 – Finally, if you have no faith in either new release but think “American Ultra” won’t fall as much as is forecasted, this is the combination for you: 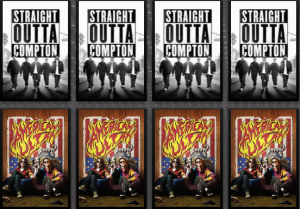