Week 2 of the Fantasy Movie League Fall season brings us a slate of three new films.  Will “90 Minutes in Heaven” take momentum away from its faith-based cohort and recent box office stalwart “War Room”?  Can M. Night Shyamalan get some audience back by adding some humor to horror with “The Visit”?  Has romcom season officially opened with “The Perfect Guy”?  These are all things to consider when building screen combinations this week.

I’d like to give a special thanks to everyone who tried my Estimate Comparator last week and especially to those who provided such constructive feedback.  Any time you expose a piece of software to a wider audience, the question isn’t, “Will they find any bugs?” but rather “How many bugs will they find?”

Each week there are several hundred thousand legal FML combinations.  In an attempt to keep page load time and slider performance reasonable, I include only a subset of those as candidates inside the Estimate Comparator.  For example, this week a single screen of “Ant-Man” and nothing else is a legal combination but not a wise one so it is a waste of resources to include it in any analysis.

The design question then becomes where the cut off should be?  Up until last week, I cut off any combination that didn’t use at least FB$700 and then I ranked each of those by best score assuming the original weekly estimates are correct, using the top 25,000 as available combinations analyzed.  Given previous Perfect Combinations, that seemed reasonable.

As the Week 1 Perfect Combination showed us, though, the flaw in that logic was the FB$700 cut off, which beginning this week I have removed.  When generating the data file used by the Estimate Comparator I now rank all legal combinations regardless of its FB$ sum, score each one according to the original weekly estimates, and have now also extended the combinations available in the Estimate Comparator to 50,000.  This should yield better results but if you find other corner cases, please don’t hesitate to let me know either via comments on this post or via Twitter @nerdguru.

Only nine of our fifteen choices have ProBoxOffice.com Weekend Forecasts this week, leaving six movies with some uncertainty that I’ll assume a rule-of-thumb 40% drop.  If you plug all that into my Estimate Comparator (http://compare.fmlnerd.com) you get the following default Best Performer comparison table:

Like last week, “A Walk in the Woods” is the top candidate for Best Performer should the ProBoxOffice.com estimates (and my thumbnails) be correct, but not by as wide a margin as last week.  Past history tells us that the ProBoxOffice.com estimates are off by between -20% and +10%.  If, instead of making its forecasted $4.8M, “A Walk in the Woods”  makes $4.32M and “The Visit” holds steady there’s a different Best Performer.

Applying the opposite logic, should “The Visit” to better than its forecasted $17.2M and earn roughly $18.9M with “A Walk in the Woods” holding steady, “The Visit” still wins.  All that to say the FB$ prices are close enough this week that lots of things can happen.  Similar cases can be made for “No Escape” and “Sinister 2”.

“War Room”, however, with a forecasted drop of just 31.43% doesn’t seem as likely a candidate to climb up this table.

Under none of the possible outcomes I looked at did it make sense to use more than 2x “The Visit” and even if it earns less than $12M it makes sense to use it once compared to even the bonus you’d get for “A Walk in the Woods”.  I haven’t used Thursday estimates in the past to make selections, but I have research on that I will be publishing soon and given how close a week it is for Best Performer, I think it is worth looking at those numbers before making a final decision.

Typically we only see Thursday data on new movies and if you have a reliable online source for all movies, I’d love to hear about it in the comments.  If we trust the ProBoxOffice.com estimate for “A Walk in the Woods” for a moment, the number to look at is for “The Visit”.  At a $17.2M forecast, you would expect to see Thursday numbers in the $1M to $1.3M range.

1a – If the Thursday numbers for “The Visit” are on the mid to low side of that range, “A Walk in the Woods” is our likely Best Performer and the following is the best combination:

1b – If the Thursday numbers for “The Visit” are above that $1.3M number, it has a good chance to be Best Performer and you should consider: 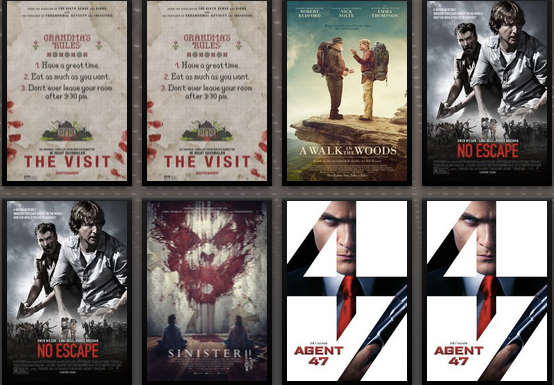 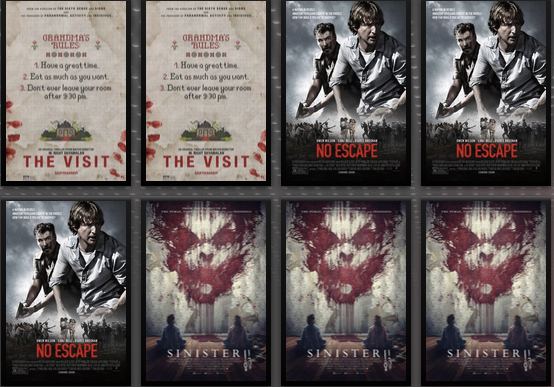 It’s a really tough week this week, so keep your eyes peeled Thursday for any additional data.  I’ll update the version of this article on my blog (fmlnerd.com) should there be significant findings.

ProBoxOffice.com just published some Thursday night numbers that show “The Visit” brought in $1.02M, which I don’t think is quite enough to justify 2x “The Visit” scenarios.  I’m going to stick with 1a) above.

Not that it helps anybody now, but ProBoxOffice.com is now reporting an estimated $21M weekend for “The Visit”.  The report from them earlier today said that it brought in $1.02M on 2,200 screens.  Based on past Thursday data I haven’t published yet (next week probably), that projects to a weekend total of between $12.75M and $20.4M, so either “The Visit” is an outlier or it’s full weekend is on more than 2,200 screens.

As I type this, my usual online source for screen counts at BoxOfficeMojo hasn’t published a weekend count yet, so it’s hard to say what exactly is happening with “The Visit” right now.  Of course, ProBoxOffice.com has been wrong before too, so that could be impacting forecasts as well. Their Saturday morning numbers are usually quite good, though, so I’ll update this post when those come in.  Hopefully there will be reliable screen count data by then as well.