Adam Sandler takes his second at bat in the 2015 movie year with “Hotel Transylvania 2”, debuting this weekend along with the Robert Di Nero/Anne Hathaway comedy “The Intern” and the giving-me-the-willies-looking-at-the-movie-posters “The Green Inferno”.  As we’ll see in a moment, your eyes should be tightly focused on a film that opened in limited release last week and has a wider release this weekend, “Everest”.

Special thanks to Sad Robot and Buttefield 8 for their suggestions.  The Estimate Comparator (http://compare.fmlnerd.com/) now has a text box field you can use to enter custom amounts instead of relying exclusively on the sliders and I’ll be updating it with some default values on Mondays instead of making people wait for the ProBoxOffice.com Weekdend Forecast on Wednesdays so that folks that like to do their own estimations can cut down on the math involved in determining combinations.  Note that until Wednesday, though, the 50,000 combination limit will be a bigger deal when it comes to missing possible viable combinations so use with caution.

If nothing extraordinary happens, that is all films come in at between -20% and +10% of their forecasts as roughly 75% of films in my study of the Summer season did, the safest combinations involve 3x “Everest” with it achieving Best Performer: 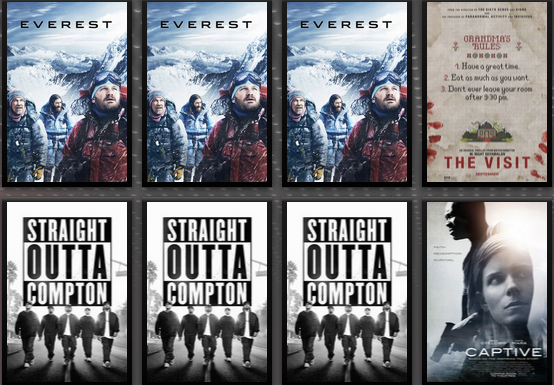 “Everest” exceeded expectations in its limited release last week, has very good reviews, and an outstanding cast.  In my variation simulations, the four combinations listed above accounted for 57.16% of the wins.

Don’t discount “The Intern”, though, if for no other reason that it has two stars that people come out to see regardless of the film genre.  If “Everest” is closer to being off by -20%, then “The Intern” has a chance at Best Performer, making these combinations attractive:

These two won in 6.45% of the variation simulations I played out.

As of this writing, there are no Rotten Tomatoes reviews for “Hotel Transylvania 2”, which doesn’t bode well for it.  But suppose something extraordinary happens and it has a huge weekend, up to $41M and “Everest” falls as described before. In that unlikely scenario, this might be worth a play:

“Everest” premiered last week, so it won’t get Thursday numbers reporting, but “The Intern” will.  Using the 5%/8% rule, look for “The Intern” to earn between $1.35M and $2.16M.  If it is on the high side or exceeds that range and you have a bad feeling about “Everest”, let that guide your choices.

Thursday numbers for “The Intern” are being reported as $650K, which seem unusually low to me.  There’s no mention of the screen counts in the reports relative to what they will be starting today, so that isn’t a definitive guide either way.

I don’t feel great about this and despite what some have called too high a forecast for it, I’m going to bank on “Everest”.  It has better reviews, exceeded expectations on its opening, and now has an expanded screen count.   There’s more upside there than for “The Intern” although I wouldn’t be surprised if it turned out the other way around.