Daily splits continue for “Star Wars: The Force Awakens” this week after a record breaking opening weekend (recapped tremendously by Zachary Knight).  Not only do we have that to consider this week but we also have Christmas Day falling on a Friday.  When was the last time that happened?  2009 when the most popular movie in the world was a little eco sci-fi flick called “Avatar” which also saw its second weekend fall on the same dates.  Incredibly, “Avatar” saw only a 1.8% drop from its first weekend on its ride to 7 straight weeks as the #1 movie domestically.

Throw in a trio of movies with visions of Oscars dancing in their heads (“Joy”, “Concussion”, and “The Big Short”, the last of which opens on Wednesday instead of Friday) and it makes for a difficult week.

I continue to be a big fan of the weekly Chatter post by Phil’s Phun Phlicks that lays out the number of showings in his metro area, Louisville, Kentucky.  So much so, he and I put our heads together and with the help of the good people over at Gracenote who gave me access to part of their movies API, I wrote him a small program that lets him automate his findings.  Here’s a differently formatted presentation of his data this week:

There are 8 theaters in the Louisville metro area and while it isn’t as good a representation as looking at every metro area nationwide would be, it is a nice approximation given that Louisville is big enough to have a major university but small enough that it doesn’t have a major sports team.

Why is this data important?  Look at “The Big Short”, which has 28 showings across 7 theaters and contrast that with “Daddy’s Home” which has 46 showings across 7 theaters.  If you considered just theater counts you would assume the same upper and lower bounds for these two films but Phil’s research shows that the details matter since one movie has 18 more showings than the other.  Assuming that difference is proportional nationwide and you can see that it reveals the upper limit potential of one film is clearly superior to the other despite the same theater count.

Like anything else, this is a piece of the puzzle and not necessarily a definitive piece of data but I like it a lot because of the nuance it reveals.

Once the ProBoxoffice.com forecast came in this week, I configured the FML Comparator with their averages and I assumed a “Star Wars” daily split according to the pricing.  When I plugged all that into my computer model, the following win probabilities revealed themselves (newly formatted to look prettier, full image): 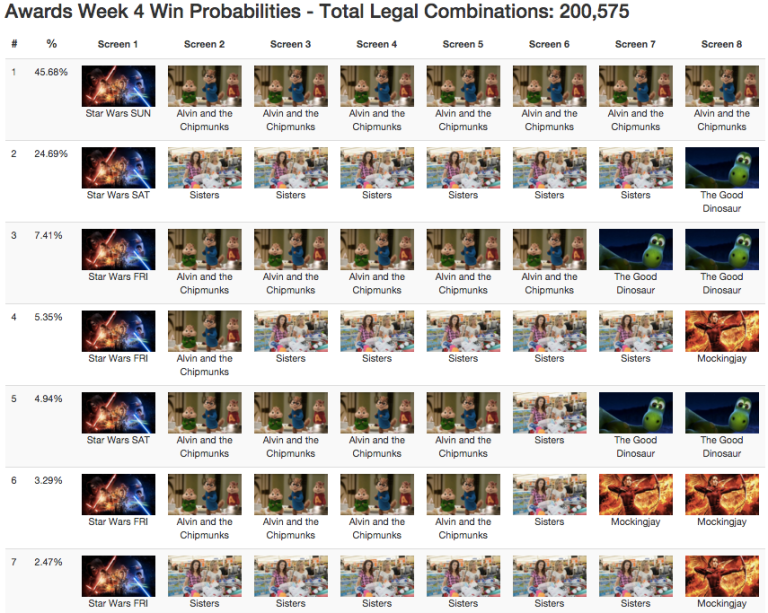 If you read one Chatter thread in preparation for this week, it should be M37’s pricing thread and you should skip ahead to the third page (and if you read two, Angry Geek’s Angry Wednesday post about the pitch meeting for “Point Break” is hilarious).  There, the case is made for the idea that the “Star Wars” choices don’t have much of a chance at Best Performer this week but the size of their box office will be significant enough that you should choose one of them at the beginning of your lineup.  Really that choice is between the more reasonably priced Sunday or Friday with its high overachieving potential based on reports of presales.

The Best Performer race is highly dependent upon what non-“Star Wars” film gets a Christmas Day bump.  Here’s a sentence I thought I’d never type: “Alvin and the Chipmunks: The Road Chip” is a solid play this week.  Despite its 13% Rotten Tomatoes rating, it is the widest released film this week for families.   “The Good Dinosaur” could be a solid play as well, but with more than 3x the showings in Phil’s analysis “Road Chip” has more upside potential.  Props to bswhite1970 for seeing this far in advance of the professional forecasts coming out this week.

Alternatively, if you see yourself spending Christmas evening with the a sibling or cousin you haven’t seen in forever and together you just want to laugh and escape the madness back at the house with all your relatives, “Sisters” is next in line for the aforementioned bump.  It dropped FB$22 in pricing this week but the professional forecasts see it earning more money, making it a more attractive play than the more expensive “Daddy’s Home”.

On my “strictly by the model” account, I’ll be playing the first line in the table but for my main account I’m tempted by the third one.  “Star Wars” Friday has a chance to go big based on the presales and will get a Christmas Day bump of its own and it hedges “The Good Dinosaur” as well.  Or, if “Road Chip” makes you really queasy, #7 could do the trick.

ShowBuzzDaily didn’t publish their forecasts Wednesday evening but should during Thursday, along with BoxOfficeMojo, so be sure to look at both of those before making a final decision.