Special thanks to Phil’s Phun Phlicks for taking over on the main FML site for me this week as a family commitment took priority over filing a picks article in a timely fashion.  I’m among those still licking my wounds over “Daddy’s Home” last week but my “by the model only” account currently remains competitive in 196th place and roughly $70M behind the leader, The Village Green.  With 9 weeks to go in the Awards Season, it’s far from over but if you missed on both “Daddy’s Home” last week and on “Krampus” in Week 1, like I did on my main account and says volumes about my common sense, it is much more difficult.  Not impossible though, since we’ve seen how quickly tides can turn in FML.

ShowBuzzDaily is off this week, so only the ProBoxOffice.com forecast was considered this week and loaded into the FML Comparator.  When those numbers get plugged into my computer model, the following table gets generated (full image): 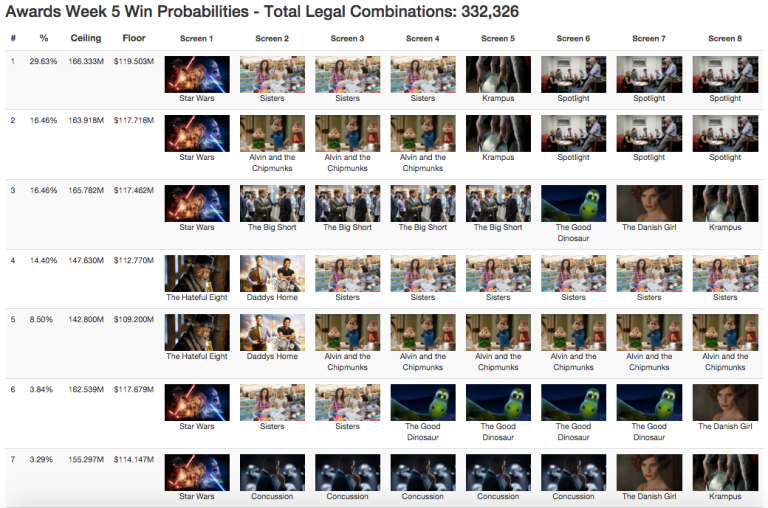 Like Phil’s analysis, “Star Wars” plus fillers is the safe way to go with “The Hateful Eight” looking skeptical.  If you look at the drops that ProBoxOffice.com is forecasting, though, “Daddy’s Home” would drop by 40% where other returning films are expected to drop 10%-30%.  If you adjust “Daddy’s Home” to a 30% drop, it still doesn’t become a Best Performer candidate, but “Daddy’s Home” x3 + “Sisters” x4 + “Mockingjay” becomes a viable play.  So if you are looking to take a chance to move up, consider that.