I usually play Switzerland when it comes to what movies do well, but this week I sincerely hope that “Deadpool” falls flat on its face this weekend.  It’s not that I don’t like Marvel characters or even Ryan Reynolds.  Making a comic book movie that amps up the violence and adult situations to the point where it earns an R rating from the folks at MPAA is not a good thing.  Like, for society.

To their credit, Fox has gone light on the merchandising and you can’t find many “Deadpool” toys at Target.com or at ToysRUs.com so they aren’t exactly targeting children and the video game version of the film has an M rating which supposedly keeps it out of non-adult hands.  But just because you can make a rated R movie based on a comic book character doesn’t mean that you should and the father in me cringes at the idea of some 11 year old boy getting in to see this film and being exposed to such things.  And I voted for Obama.  Twice.

But I digress and brig you data for my picks this week.

Here is the summary table that I use to assess the results of my model (full table):

This week is a little tricky since the nice folks over at ShowBuzzDaily only forecasted Friday/Saturday/Sunday but not Monday.   To compensate for that given our task, I used the number that my friend and podcast guest M37 developed this week and bumped the SBD numbers by 16.05% to get a full three day weekend forecast.  That splits the difference of the range M37 developed for a typical President’s Day boost.  The result is the ShowBuzzDaily Adjusted column above.

Given that, The PBO and came from the ProBoxOffice.com forecast this week (which included the full holiday weekend).  Those were hen averaged with the ShowBuzzDaily Adjusted column.  The Value column divides the Average by the FB$. The Use column applies the average of the Value column to non-forecasted films based on their FB$ and is the full list of what I use in my model.   The PPP Showtimes column is data, courtesy the kind folks at Gracenote who let me use their showtimes API, from the Phil’s Phun Plicks Chatter post on showtimes in his metro area.  I like that number because it is often more revealing than theater counts since the latter doesn’t tell you how often a particular theater might be showing a movie.

Those mathematics generate a list of Best Performer (BP) candidates that includes “Star Wars”, “The Revenant”, “Ride Along 2”, and “Kung Fu Panda 3”.  Let’s next see how my model interprets those numbers. 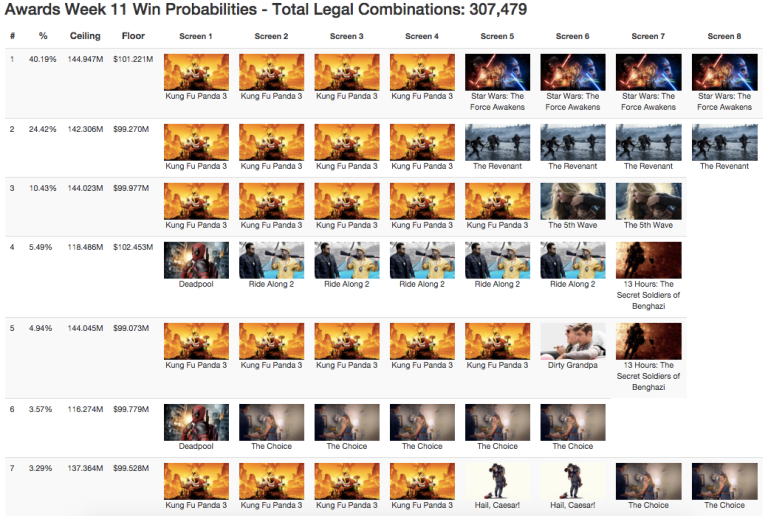 The professional forecasts like “Star Wars” as Best Performer by quite a bit.  “Kung Fu Panda 3” is the 4th choice and, as the PPP Showings column in the Summary Table demonstrates, it has a pretty high number of screenings still relative to the competition.  Because of this, my model likes the hedge of 4x “Kung Fu Panda 3” + 4x “Star Wars” and that’s what I’ll be playing on both of my accounts this week.

If you need to catch up in your league and are a big believer in “Deadpool” that 4th combination might attract you and hedge with BP candidate “Ride Along 2”.  Alternatively, if you really like “How to be Single” to crack $20M, although it didn’t pop up on my model as being a possibility you could go with “How to be Single” + 3x “Kung Fu Panda 3” + 4x “Star Wars”.