That was one rough President’s Day/Valentines Day weekend from where I’m sitting.  Not only did not everyone agree on my social take on “Deadpool” last week (which did lead to a lively discussion on The Chatter) but it surpassed professional forecasts by leaps and bounds, putting those who chose it in their line up in a great position with just two weeks remaining in Awards Season.  As The Box Office Guy and I discussed on the podcast this week with Summer Season winner Glacier, this was the third time this season that a particular movie tipped a $50M scoring difference in the standings.

Will it happen again this week?

Here is the summary table that I use to assess the results of my model (full table):

As always, the professional forecasts (ProBoxOffice.com and ShowBuzzDaily) are shown above.  The Value column divides the Average by the FB$. The Use column applies the average of the Value column to non-forecasted films based on their FB$ and is the full list of what I use in my model.   The PPP Showtimes column is data, courtesy the kind folks at Gracenote who let me use their showtimes API, from the Phil’s Phun Plicks Chatter post on showtimes in his metro area.  I like that number because it is often more revealing than theater counts since the latter doesn’t tell you how often a particular theater might be showing a movie.

That math generates a list of Best Performer (BP) candidates that includes “Star Wars”, “The Revenant”, and “Kung Fu Panda 3”.  Let’s next see how my model interprets those numbers. 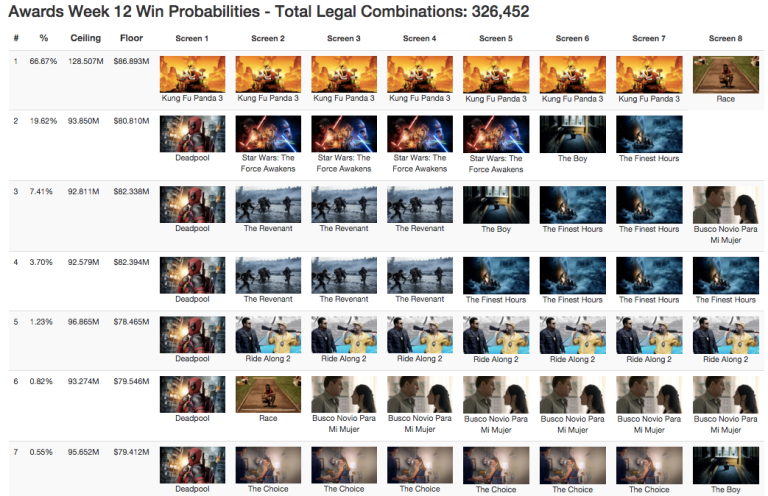 Weird math continues as for the first time, my model recommends a combination that would not have what the pros predict will have Best Performer in it, “Star Wars”.  Combinations of “Kung Fu Panda 3” x7 and your choice of a mid-level filler are the status quo safe bets.

Given the pricing for “Deadpool”, all other things being equal, it would have to get up above $73M for the weekend to be approachable, being used in combinations with “Star Wars” x4 and an empty screen along with some low end fillers.  That would give you a shot at that BP bonus and what is sure to be the weekends largest grossing movie.  As Phil pointed out, it raised the number of showings in his metro area, which means that theater managers there expect big crowds again.

As always, I’ll be taking the top pick in the table from my “model only” account but I’m torn between a “Deadpool” combo and “Kung Fu Panda 3” x7 + “The Witch” (Kung Fu Witch?  Witch Fu?  What’s the nickname for that one?) on my main account, the latter of which I think has a chance to surprise and bring in $10M based on the loyal following of horror fans.  Regardless, we more than likely do not have a big swing weekend in the wake of the opening for “Deadpool”.