Is it better to be lucky than good?  Spring Season leader The Sandlot effectively said as much on the Week 10 podcast and sure enough, it happened to me this past weekend.  I was pretty certain that, despite the proportionally higher price compared to other daily split opening weekends, that the Friday edition of “Civil War” was the way to go last week along with 7x “Mother’s Day”.  I totally nailed that, but for completely wrong reasons.

So by Monday morning, the 2x Sunday + 6x MD crowd was feeling pretty good about things when the “Mother’s Day” returns started creeping in.  A thread started by The Legend of Hershal Leon captured the action nicely, but things got heated when a often repeated argument of who got lucky vs who made intentional picks resurfaced, this time “Mother’s Day” going for over $11M substituting for the prior incarnation of this same argument for “Daddy’s Home” back in December.

I can’t speak for others, but I’ll out myself as one of those in the lucky camp.  While “Mother’s Day” was poised to do well, I sure never saw it going for nearly double its pro forecasts.  Because it did, it covered my faulty Friday logic and dropped a Perfect Cinema in my lap.  Read ikaikatilton’s comment #71, which I think perfectly describes this game.  As I mentioned on the podcast, the skill/luck ratio in this game lies somewhere between poker and professional basketball and that’s what makes it fun, the not knowing what will happen.

When I run my model for the week (based only on the ProBoxOffice.com forecast this week since ShowBuzzDaily’s forecast was not available as of 10:00p Pacific on Wed) here’s what it comes up with (full image): 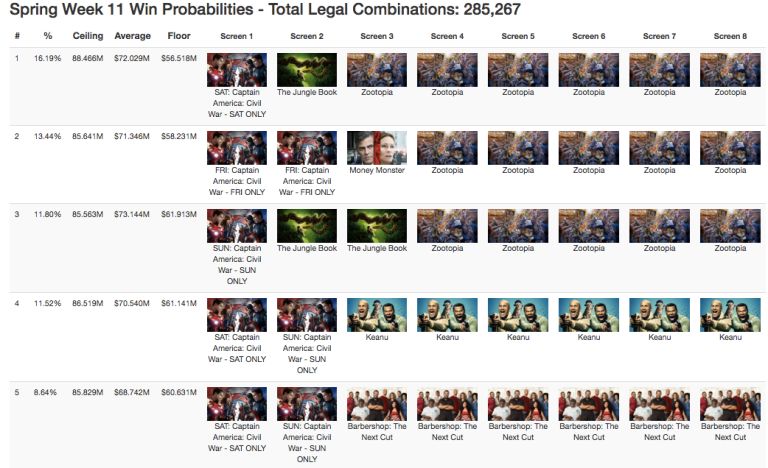 After Patrick and I recorded the podcast on Wednesday night, I found an error in my math.  Previously, I thought that 2x “Civil War” Friday was the lone high end contender this week, but upon correcting my spreadsheet mistakes (and my coding bugs on the Comparator data file generator having to do with split days) I no longer feel quite that definitive.  Please accept my apologies for any inconvenience that might have caused.  The Comparator has been updated with the corrected math based on the ProBoxOffice.com weekly forecast.

At the low end, Pro Box Office likes “Zootopia” to rebound along with possibly “Keanu” and “Barbershop”, all Best Performer candidates.

As always, on my model only account, I’ll be playing the top item in the model output, but on my main account I’m not so certain.  Thursday will yield better data on theater counts and showtime volumes, which will give us a better idea on which of the three low end fillers (and Best Performer candidates) will have the best opportunity to fulfill its current forecast.  None of the three will have the “second weekend” rule protecting its market share, so if pressed to make a selection now I’d lean towards one of the “Zootopia” options because of its proven long tail.  The first row in the results has the highest ceiling but also the lowest floor.  The third item, Sunday + “Jungle Book”x2 + “Zootopia” x5 has the higher floor and is a little more attractive to me, but I’ll be waiting until Thursday data comes in before making a final pick.