Can you separate the sins of the man from beauty of his art?  With “Birth of a Nation” this week, we are asked to consider this difficult question about Nate Parker.  Consensus seems to be, in this case at least, that you cannot as the ProBoxOffice.com Long Range Forecast for “Birth of a Nation” has fallen from a high of $19M to $10M last week to a weekend forecast of $9.5M.  This film has a high ceiling if people are willing to overlook the personal life of the writer/director/lead actor but an awfully low floor if people are not.

Combine that with the fact that a hurricane will likely hit land over the weekend and displace a large portion of the Southeast population and it can feel like our little movie game is dwarfed by more serious issues right now.  As I’ve mentioned several times on the podcast, I have extended family in Louisiana and hurricanes don’t mess around so please stay safe if you are in any way remotely impacted by weather events this weekend.   Still, many people are looking for a distraction and hopefully a little discussion about movie revenues can provide that.

As always, here is the summary table that I use to assess the results of my model (see the full table at http://analyzer.fmlnerd.com/model): 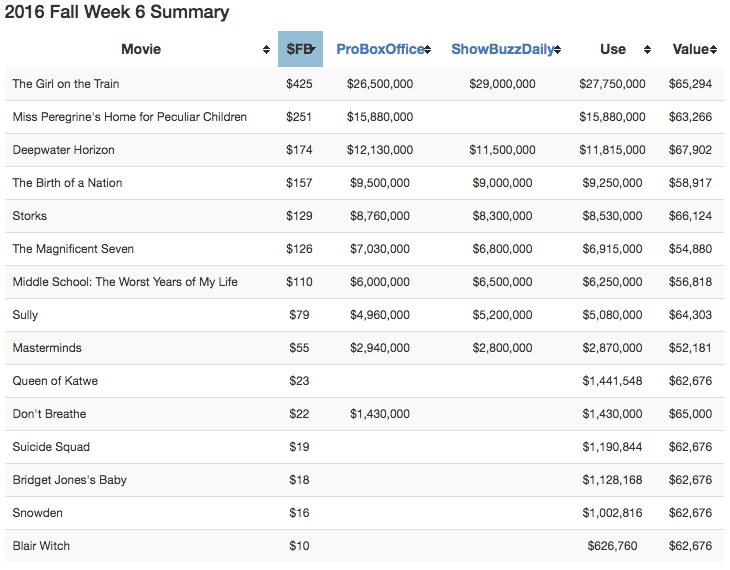 When I plug the Use column into my model (which are also loaded in to the FML Lineup Calculator for your use), here’s what it comes up with (see the full output at http://analyzer.fmlnerd.com/model): 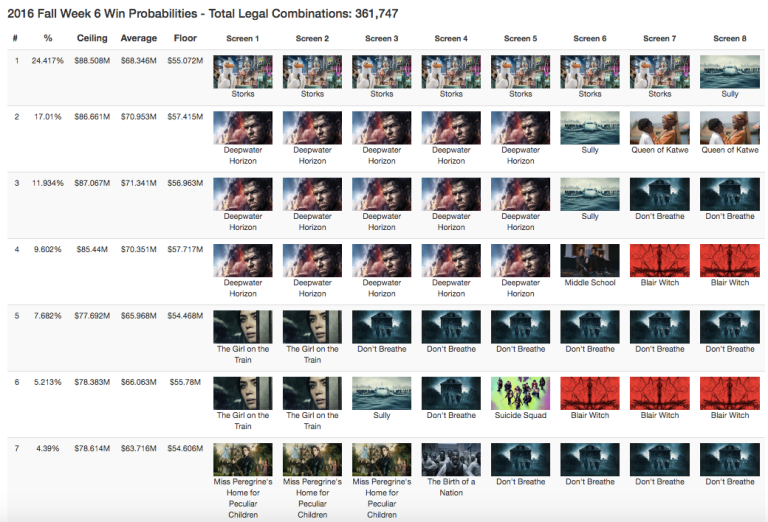 ProBoxOffice.com and ShowBuzzDaily like week two of “Deepwater Horizon”.  It is easy to understand why given that it is is well reviewed film holding on to its full load of theaters given the two week rule.  In fact, the average of the pro estimates yields 4x “Deepwater Horizon”, Sully, and 2x “Queen of Katwe” as the Perfect Cinema this week.  Keep in mind, though, that neither pro forecast included “Queen of Katwe” and its estimate is based on an extrapolation of average value of forecasted films and its FB$.  If you think, like I do, that “Don’t Breathe” can beat “Queen of Katwe” straight up, it is the better two screen play at the bottom of a  “Deepwater Horizon” led lineup this week.

However, as the model output above shows, the most model simulations were won by a lineup heavily loaded with “Storks”.  So, if you think people won’t come out to a film about a disaster on a weekend where there will likely be an actual disaster this might be the combination for you.

If you like the slow burn that “Don’t Breathe” has been exhibiting, though, it on six screens combines well with two screens of “The Girl on the Train”, whose reviews have been slipping as the week goes on.  Last week, Perfect Cinema ended up being the 7th model output choice, so if you think “Miss Peregrine” has good hold possibilities, you can play it 3x this week with a single “Birth of a Nation” and 4x “Don’t Breathe”.

As it stands now, although subject to change given showtimes and final theater counts, I like one of the “Deepwater Horizon” combinations.  Many people will have to leave their homes this weekend but many more will be faced with bad weather and when that is the case, adults and kids are more likely to stay put than teens.  Of the films with strong hold possibilities, “Deepwater Horizon” and “Don’t Breathe” are the most teen friendly (see: teenage boys + cinematic explosions).  Of course, should “Don’t Breathe” hang in there then that combination with “The Girl on the Train” is attractive, so keep a close eye on those theater counts for “Don’t Breathe” on Thursday.