It’s been kind of a rough week on forecasting, right?

A wise man once said, “You think you know, but you DON’T KNOW.”  OK maybe “wise” is a bit strong there for someone who couldn’t win a playoff game even with Peyton Manning, but a quotable man nonetheless.

And so it was with me and “Trolls”.  Based on the Thursday preview numbers, I was pretty confident that “Doctor Strange” would come in between $85M and $90M and while that ended up on the low end, I’m still completely shocked by “Trolls”.  Why?  Because ProBoxOffice.com rarely makes that big a jump between its Long Range Forecast and its Weekend Prediction and one time it did that, it looked like this:

But sometimes things happen that we didn’t expect and “Trolls” won the day.  The great thing about Fantasy Movie League, though, is that there’s always another week right around the corner.

As always, here is the summary table that I use to assess the results of my model (see the full table at http://analyzer.fmlnerd.com/model): 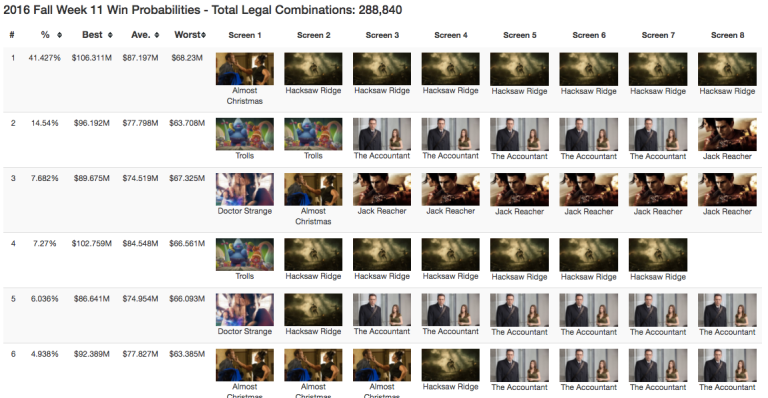 My fear is that weekly ShowBuzzDaily forecasts are lost to us forever.  It’ll take a little bit of code unwinding on my part to remove them and I like the suggestion that some people have made that I set it up to pull BoxOfficeMojo forecasts on Thursdays.  While that doesn’t help this space a whole lot given its Wednesday evening deadline, Chatter threads offer a solution there.

ProBoxOffice.com, and by extension my model, really like “Hacksaw Ridge” to have a strong hold and given its positive reviews and Veterans Day Weekend, that makes a lot of sense.  The most obvious play there is one screen of “Almost Christmas” and 7x “Hacksaw Ridge” although the daring will consider a screen of “Trolls” and 6x “Hacksaw Ridge” along with a blank screen.

If “Trolls” has a strong hold, there are several 2x lineups to consider, but absent other information I like it with 5x “The Accountant” and a screen of “Jack Reacher”.

Speaking of “Almost Christmas”, earlier in the week I thought it had potential to threaten $20M but both ProBoxOffice.com and Deadline seem to disagree.  Similarly, both are pessimistic on “Arrival” despite Patrick liking it to be in the low to mid $20M’s and nether particularly likes “Shut In” and it’s noob distributor to make a case for Best Performer.

That means we’ll be looking squarely at returning films to fill our cineplexes with this week.  Along those lines, ProBoxOffice.com likes “Doctor Strange” more than I do, because, fool me twice, shame on me.  After a Thursday Preview number that suggested a $90M weekend, the latest MCU film ended up below $86M so I don’t expect it to reach the $36.5M that “Thor: Dark World” did its second week as that difference from last week would indicate this installment of the comic book mega-saga appeals more to the core fan base than the public at large.

However we do have a familiar wrench to think about in the form of “Moonlight”, which had a low enough theater count last week that it didn’t merit consideration.  Pretty much the same math applies this week as it did last week.  Some early social media activity would seem to indicate that it will be below 200 theaters and not worth your time, but should it surprise it would need above 350 to get in the $2.6M range and be a BP contender.  Should that unexpectedly happen in a week of unexpected happenings, 2x “Trolls”, “Hacksaw Ridge”, and 5x “Moonlight” is your play.

New this week on the Lineup Calculator is the ability to pin lineup combinations and produce links that save those pins along with your custom forecasts.  For example, here is a link for lineups mentioned in this article that are pinned.  Feel free to play with that and share your thoughts on the Chatter and good luck to all!